Spain has a rich and complex typology of protected natural areas. This great variety of legal and administrative figures, combined with the fact that many of them overlap spatially, makes it particularly difficult to understand how our protected areas are distributed and the differences between them. The following is a description of the main types of Spanish protected areas.

It is very important to bear in mind that many of these figures overlap in the same territory. For example, almost all natural and national parks are themselves part of the Natura 2000 Network, and some are included under other international figures. In other cases, different types of protected areas come together without overlapping in the same area. For example, in the Doñana area there is a natural park and an adjacent national park, which overlap with categories such as wetlands of international importance, Natura 2000 sites and a biosphere reserve. While this concentration and overlapping of protection categories serves to increase the levels of protection and national and international recognition, it also increases the complexity of the administrative procedures to be carried out at the same site.

* There is a high level of overlap between the two types of Natura 2000 sites (SPAs and SCIs/SACs), so that in reality the number of really different sites is about half the figure given. Their total area has been estimated avoiding double counting of overlapping surfaces.
** Including declared marine reserves and the two marine protected areas.
*** Total area includes: natural protected areas (NPAs), Natura 2000 network, biosphere reserves, RAMSAR Convention wetlands of international importance, SPAMI, OSPAR and geoparks.

The following is a description of the main types of protected areas present in Spain:

National parks are natural areas of high ecological and cultural value that show minimal signs of human activity and whose conservation is declared to be of national interest. They are the oldest type of protected area in Spanish legislation, with the first national parks (i.e. Ordesa and Covadonga) having been declared in 1918. Overall, national parks tend to conserve a country’s most emblematic landscapes. In Spain these spaces are managed by the Autonomous Communities with the support, financing and supervision of the Spanish Government through the National Parks Service. In general terms, national parks have higher levels of investment, some specific limitations (e.g. prohibition of hunting, commercial logging and fishing) and higher levels of public visitation compared to other types of sites. Spain currently has 16 national parks which occupy less than 1% of the country’s land area. 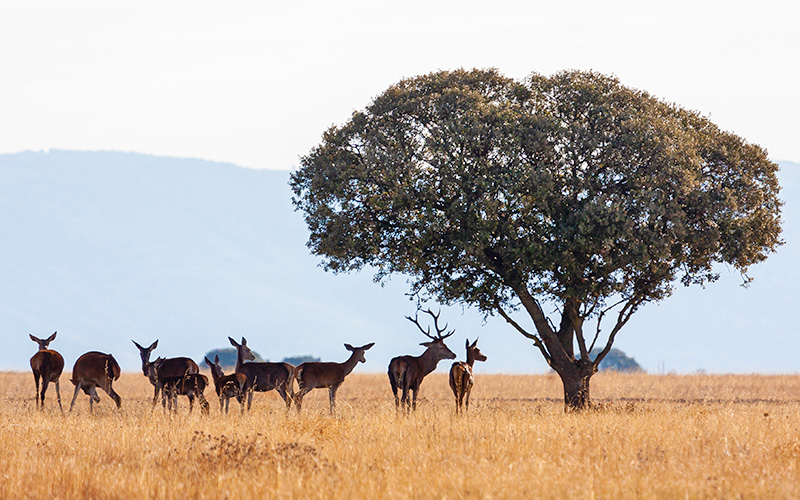 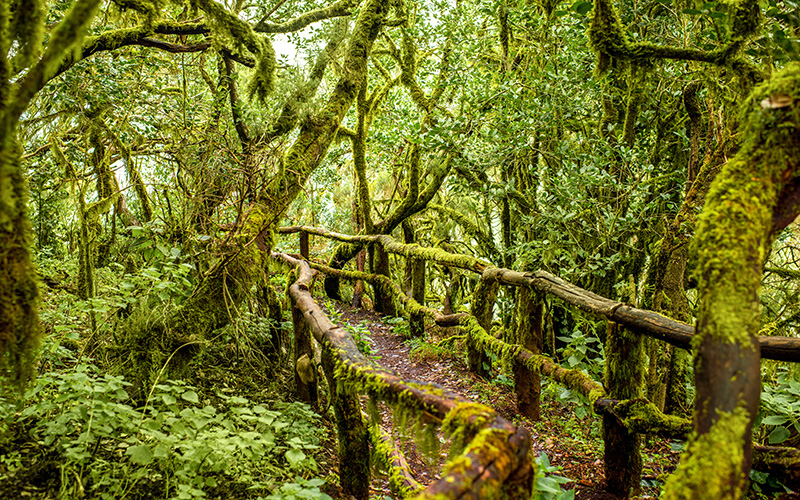 Unlike national parks, which respond to national priorities, natural parks respond to the conservation strategies of the Autonomous Communities, being created and financed by them. In general, they are multiple-use areas that allow for a great diversity of traditional and extractive activities, and may include landscapes and environments with a significant human footprint. Natural parks usually combine areas of very restrictive use with others that are much more permissive, and often include inhabited areas or towns within them, something that rarely occurs in a national park. Spain has currently 152 natural parks, covering an area of more than 4 million hectares, or 8 per cent of the country’s land area. In general, these parks have staff specially dedicated to their management, with the level of investment varying greatly between provinces and autonomous communities. 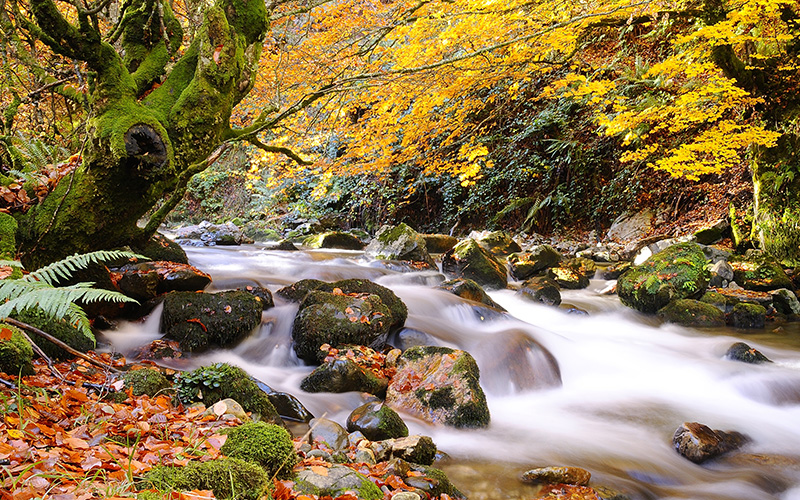 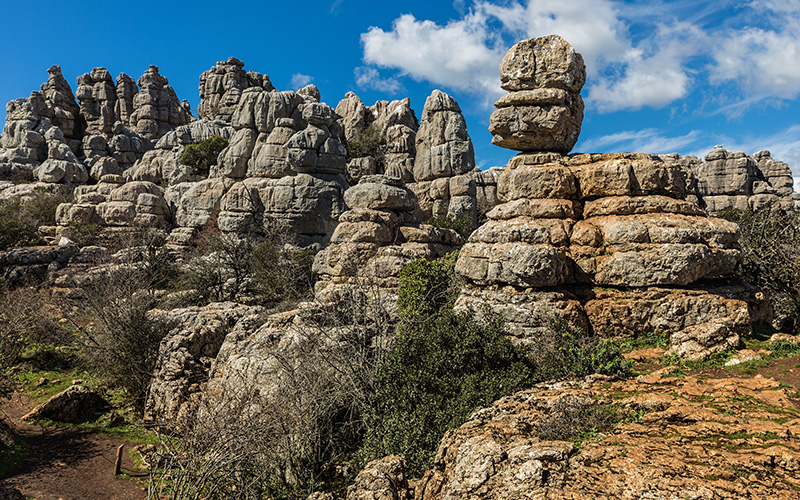 The Natura 2000 Network is the largest network of protected areas in the world and the main instrument for nature conservation in the European Union. While the national parks respond to national legislation and the natural parks to their respective autonomous communities, the protected areas of the Natura 2000 Network respond to the European Union’s habitat and species conservation directives.

There are two types of areas in the Network: Sites of Community Importance (SCIs), which become Special Areas of Conservation (SACs) when their management plans or instruments are approved, and Special Protection Areas for Birds (SPAs). These areas can be terrestrial or marine. Spain is the Member State that contributes the largest total area to the network, the first in terms of land area and the second in terms of marine area after France. In total, Spain has 1,468 SCIs/SACs and 658 SPAs covering more than 22 million hectares, or 27.3% of Spain’s land area.

Unlike national and natural parks, Natura Network sites do not usually have their own staff and infrastructure, beyond those dedicated to these parks when they are part of the Network. This means that they serve more as spaces dedicated to regulating uses than to promoting or encouraging conservation actions or public use. Due to their extension and the legal coverage of the European Union, the Natura 2000 Network sites represent one of the main conservation tools in our country. 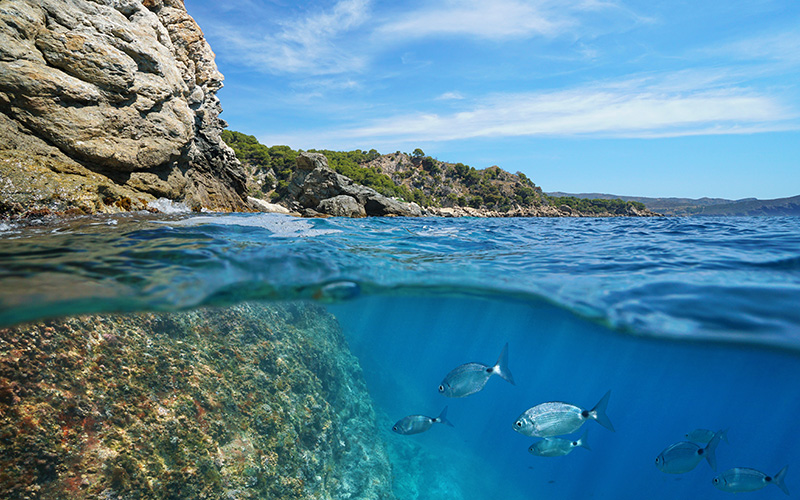 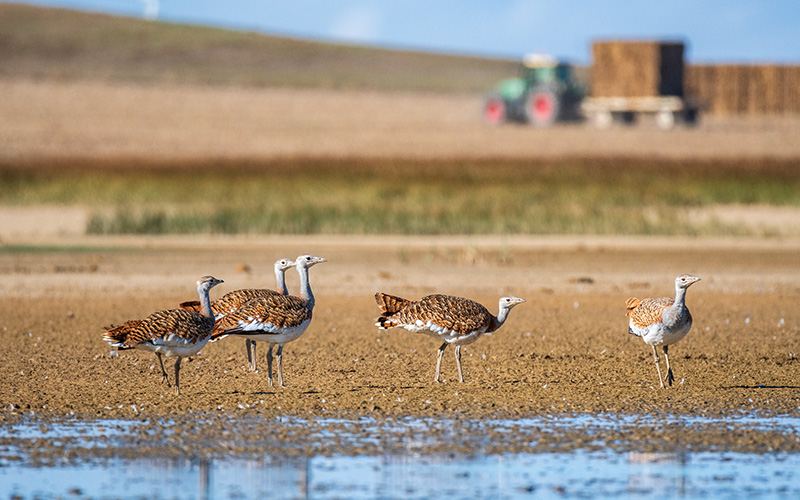 Apart from the aforementioned areas, the national law on Natural Heritage and Biodiversity includes other protected natural areas such as nature reserves, natural monuments and protected landscapes. Spain has 291 nature reserves, which occupy 0.3% of the country’s land area. The small protected surface area for the high number of natural reserves (higher than the number of natural parks) indicates that these are areas that seek to protect small, unique natural spaces rather than ecosystems. Nature reserves often appear as limited and particularly restrictive areas within natural parks or Natura 2000 sites.

This tendency towards small size is exacerbated by natural monuments, with 359 sites covering only 0.17% of the country. Many of these monuments tend to protect the source of a river, a striking geological formation, or bird nesting or bat roosting areas. Finally, the protected natural landscape, with 61 examples in the country, is a lesser-used type of protected area that seeks to conserve landscapes with fewer restrictions than natural parks or national parks. In general, these three types of sites do not have their own staff dedicated to their management, although they may have significant infrastructure for public use.

Apart from the previous categories, the Autonomous Communities have developed more than 20 different legal figures generally applied to small sites. These include flora micro-reserves (especially important in the Valencian Community), privately managed protected areas or municipal nature reserves. These smaller sites under local or private management have increased particularly in recent years and are expected to continue to do so in the coming years. 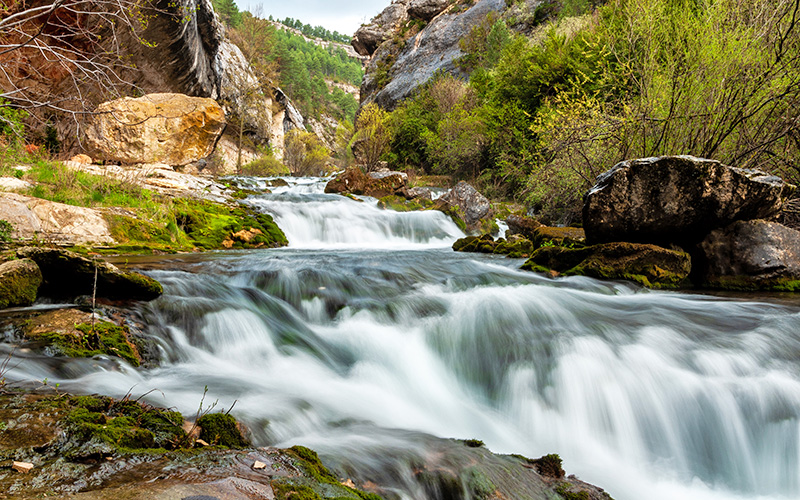 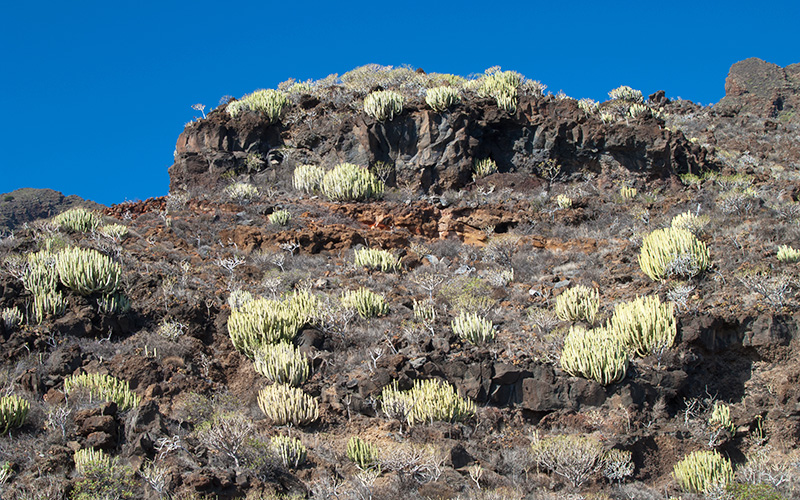 In addition to marine SACs and SPAs, Spain has two marine protected areas (El Cachucho and the Mediterranean Cetacean Migration Corridor) and 23 marine reserves, of which 10 are totally or partially managed by the General Secretariat for Fisheries and the other 13 are managed by the autonomous regions. Some of these reserves have as their legal objective the protection of fishing resources (which does not prevent them from conserving biodiversity in general) while others have as their legal purpose the protection of marine ecosystems and the species that live in them. Some of these marine protected areas have clearly dedicated staff and resources, while others exist largely on paper. 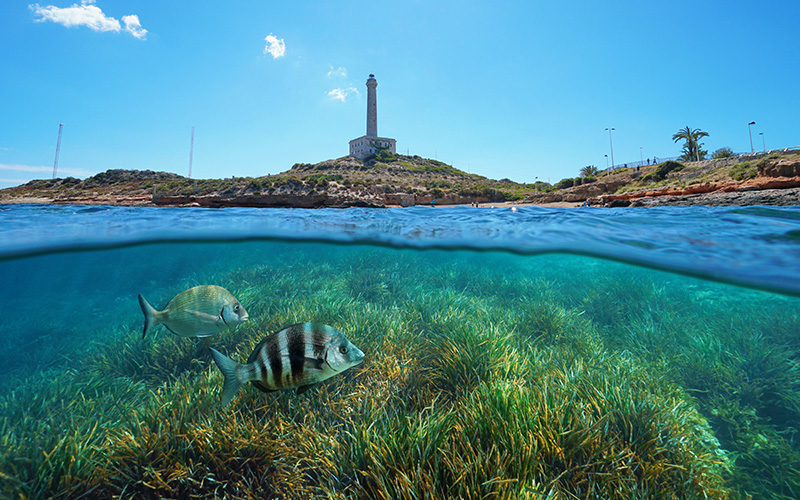 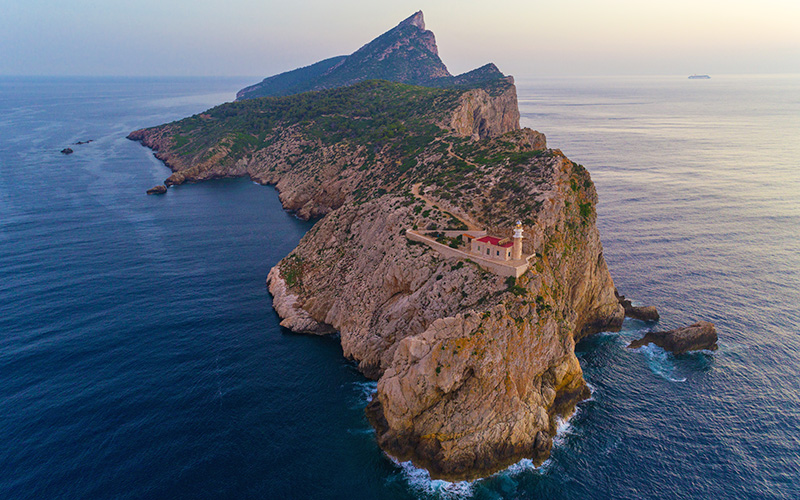 In addition to the areas described above, there are other areas designated under international conventions and treaties signed by Spain. Unlike the previous ones, these do not usually have legally established management plans, but are fundamentally of international relevance, with all that this entails in terms of compliance with international obligations and standards in relation to their care and management. In other words, these sites serve more as “quality labels” monitored by international bodies than as areas with a clear legal mandate and their own technical team dedicated to their management. In any case, both Ramsar wetlands and biosphere reserves partially or totally coincide with some of the above-mentioned areas (especially the parks), which gives them greater legal and operational weight.

Spain has signed the Ramsar Convention, the purpose of which is the conservation and wise use of wetlands. This convention includes the inclusion by the signatory countries of at least one wetland considered to be of international importance. Spain has currently officially designated 75 wetlands under this category, making us the third country in the world in number of wetlands of international importance after the United Kingdom and Mexico. 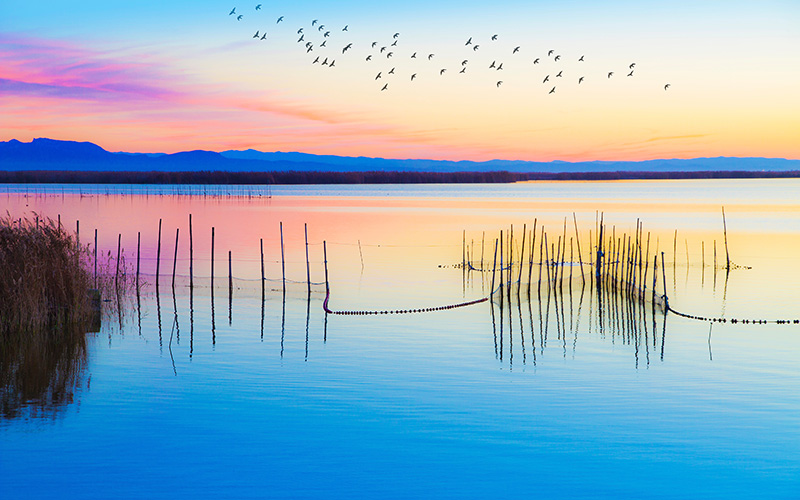 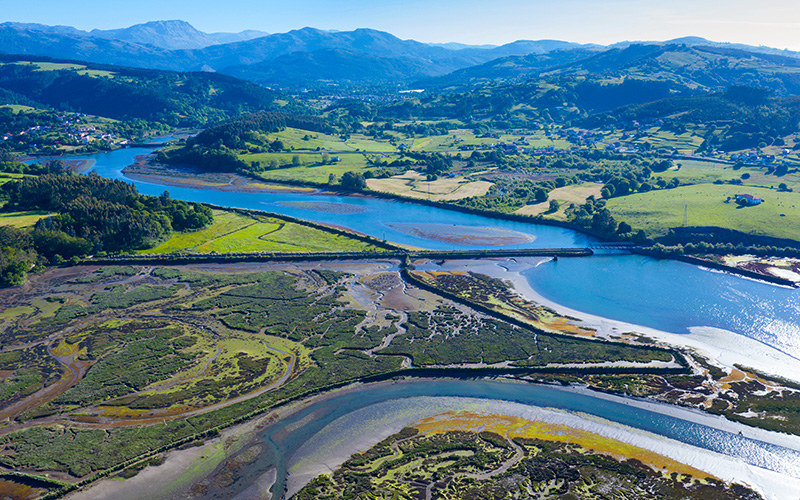 Biosphere reserves are territories designated by states to UNESCO whose main objective is to harmonise nature conservation with socio-economic development. Spain currently has 53 biosphere reserves recognised, making it the world leader in this type of international space. In total they cover an area of 6 million hectares, which represents 12% of Spain’s land area. Biosphere reserves are made up of core areas, which are usually national or natural parks with limitations, staff and infrastructure clearly aimed at conservation and public use, and buffer areas, which are usually much more lightly regulated or unregulated. Some biosphere reserves have management teams specifically dedicated to developing conservation and sustainable development projects within them. 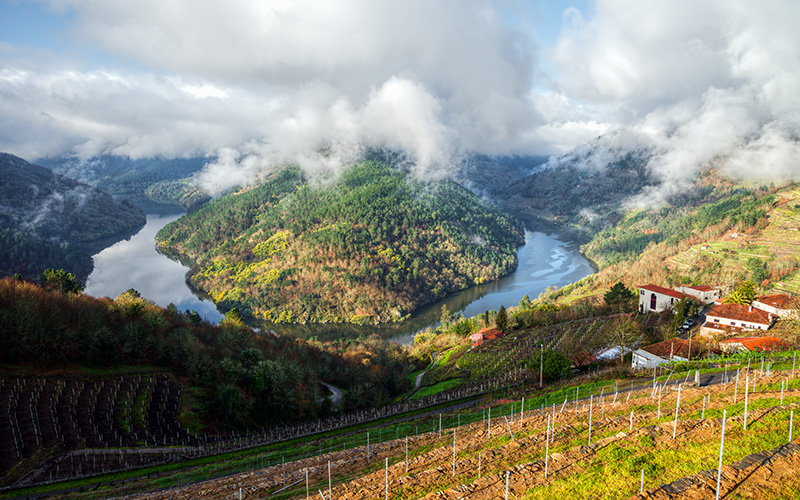 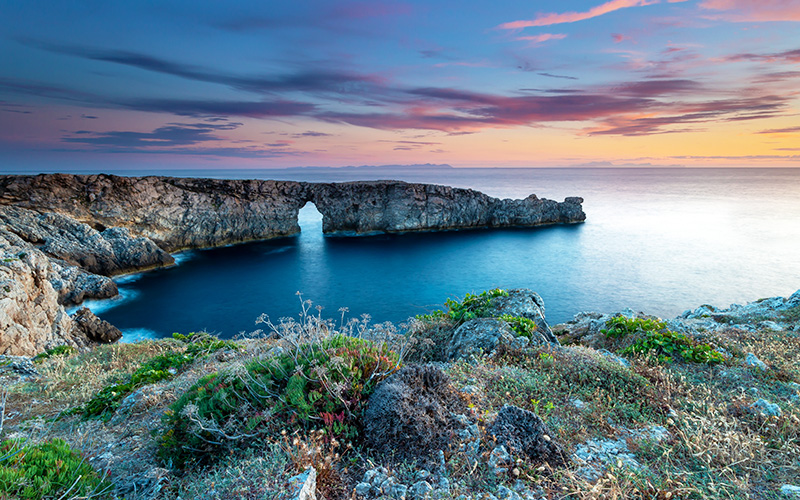 A geopark is a territory that contains both a unique geological heritage and its own development strategy. As of 2015, geoparks were included by UNESCO in the Global Geoparks Network. In Spain there are 15 geoparks that have been declared. This figure acts more as a figure of landscape promotion than as a true figure of protection as it lacks the legal capacity to limit or regulate uses or a staff clearly destined to its management on the ground. Spain is the second country in the world in terms of geoparks, after China. 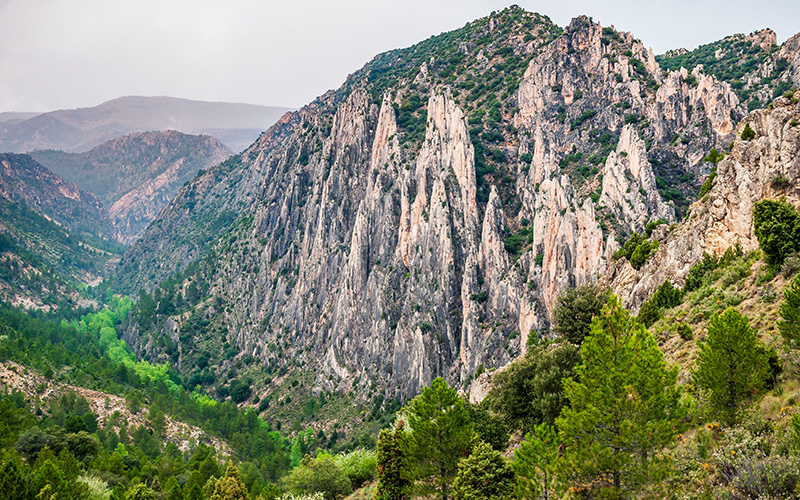 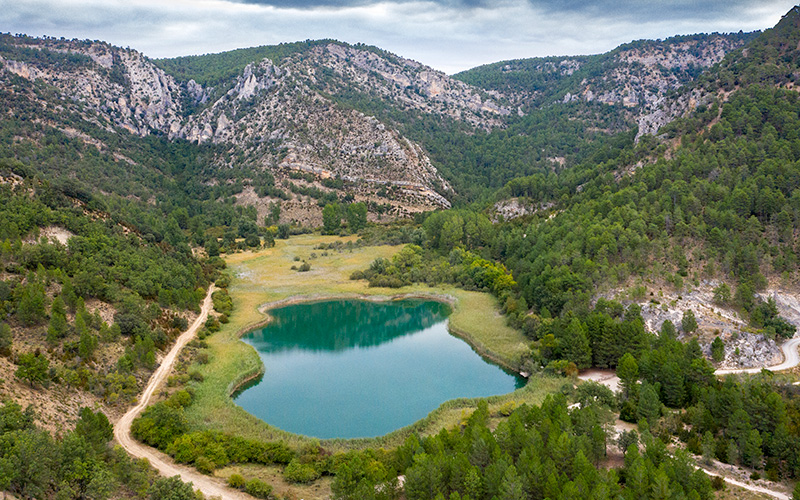 In order to protect the seas against threats such as dumping of hazardous waste or other threats derived from traffic in the Atlantic, several agreements were signed in the early 1970s, which were unified in 1992 with the signing of the OSPAR Convention. Spain contributes 15 areas to the OSPAR network with a total surface area of 2,690,919 hectares. The OSPAR Network areas are declared and managed by the Spanish government within marine areas under national sovereignty or jurisdiction, provided that there is no ecological continuity of the marine ecosystem with a natural terrestrial area under protection, backed by the best existing scientific evidence, in which case it is up to the Autonomous Communities to declare and manage them.

The Specially Protected Areas of Mediterranean Importance (SPAMI) were created within the framework of the Barcelona Convention signed in 1995 to guarantee the conservation of the natural values and biological resources of the Mediterranean Sea. The declaration of a SPAMI implies the recognition that its main objective is the conservation of natural heritage, with other complementary objectives such as cultural heritage or scientific and educational value. The area must already have a legal protection status and therefore minimum standards to ensure that there is an entity responsible for its management. It must have a management body, a management plan or a commitment to establish it within a short period of time, maximum 3 years. 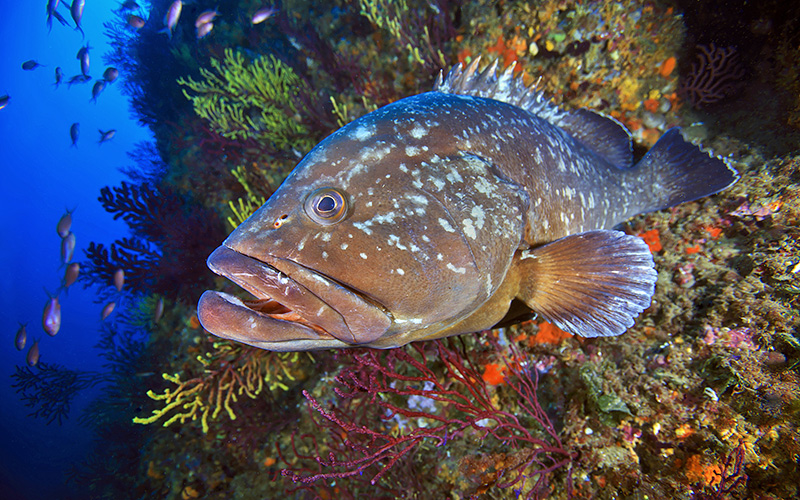 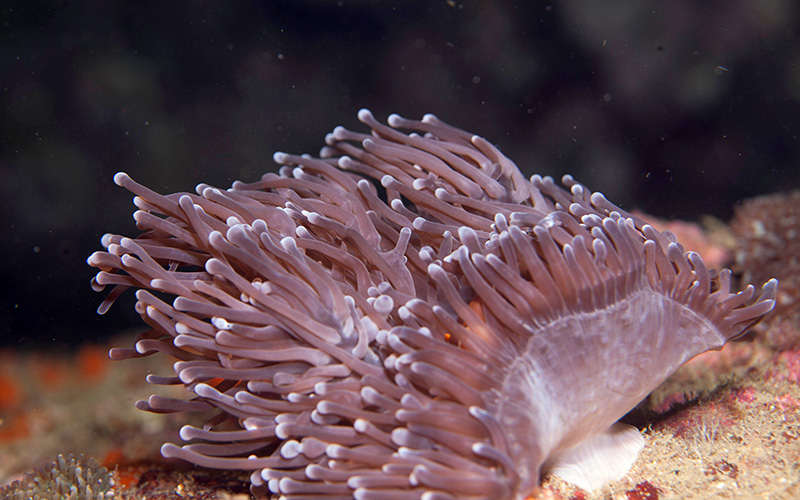